Shootings in the United States: How Many Americans Know A Gunshot Victim? 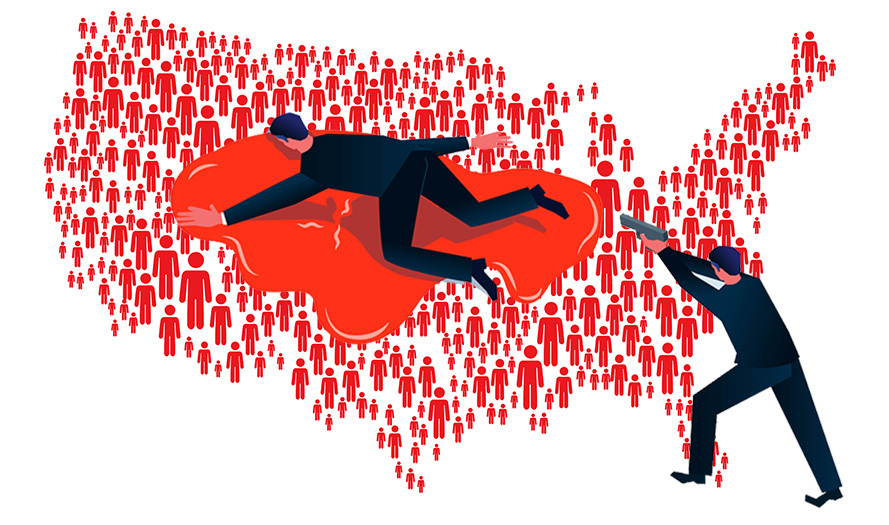 If it seems like there is a shooting every time you turn on the news, open a newspaper, or navigate to a news website – you may be right.  Every day hundreds of people are shot in the United States.  In fact, over the last several years, more than 300 people have been shot each day, and more than 110 die from their wounds.  Nearly 80 percent of murders and over half of all suicides involve a firearm.

It is hard to overstate the effect that shootings have on victims and their families, but how widespread is it?

There is surprisingly little quality data available about gun violence.  Even data from the CDC is sparse and unreliable, prompting organizations like the Brady Campaign to End Gun Violence to move away from using it and explore alternate data sources.

At Mickelsen Dalton LLC, we have significant experience representing gunshot victims and have always been interested in the issue of gun violence.  We also understand that America’s relationship with guns is complicated.  The right to bear arms is a freedom granted by the constitution and gun culture is deeply woven into the fabric of our nation.  Yet, gun violence, suicide, and gun deaths have steadily increased since 2011.

To provide more context, in October 2022, Mickelsen Dalton LLC conducted a new survey of U.S. adults.  Our primary question was this: how many Americans know someone who has been shot? 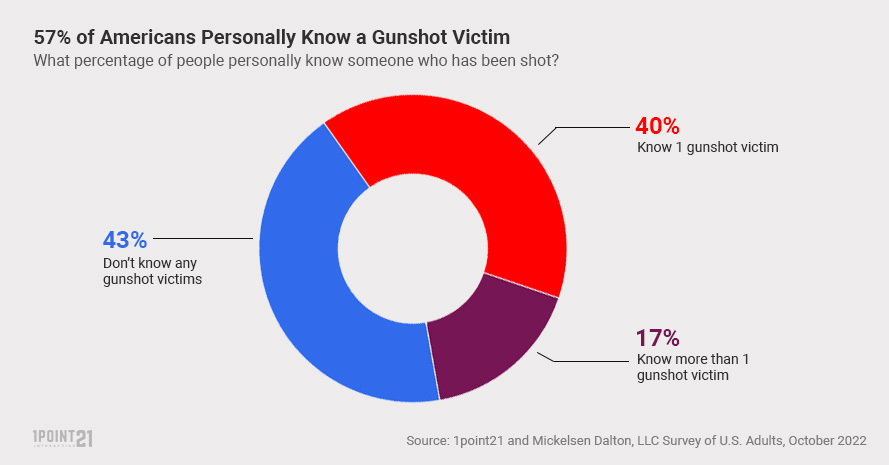 Since shootings can have vastly different outcomes, we asked about what happened to the victim.  Nearly 27 percent of all respondents reported that they knew someone who was fatally shot, while just over 40 percent said the person was injured but recovered.

One respondent reported that they knew someone who was shot seven times and lived and that they consider him “their local 50 cent”.

Below, we dug deeper into the circumstances surrounding the respondents who reported knowing a gunshot victim.  We asked questions about their relationship with the victim, who the shooter was, and where it occurred among many others.

Who Was The Person Shot?

Overall, the highest percentage of respondents had a friend who had been shot.  In fact, 62 percent of respondents who know a gunshot victim reported that that person was a friend.  The next closest group was family members and romantic partners – a category that could include blood relatives, spouses, or boyfriends and girlfriends.

Nine percent of this group of respondents reported that they themselves had been shot. 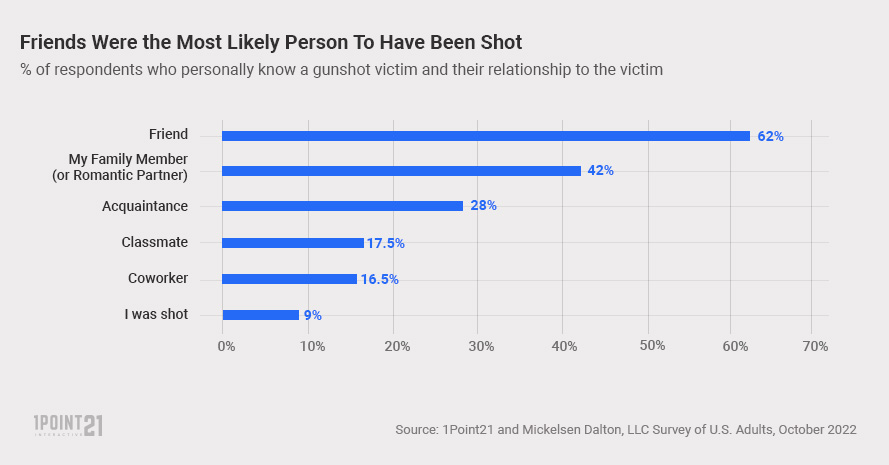 How Did the Shooting Occur?

In most cases, the shooting was the result of gun violence (62 percent).  Accidental shootings  (36 percent) and suicide attempts (23.5 percent) were the second and third most common.

Despite the fact that suicides make up as many as 3 out of 5 gun deaths, it may not be surprising that incidents involving self harm came in third.  This is likely because suicide attempts involving a firearm are almost always fatal, with some studies showing that 9 out of 10 attempts result in death.  Therefore, there are likely many fewer non-fatal incidents than there are with gun violence or accidental shootings.

Victims’ Relationship to the Shooter

The FBI reports that most murder victims knew their attacker and that appears to be the case here.  In fact, 52.2 percent of respondents reported the victim knew the shooter, while 47.8 reported that the shooter was a stranger. 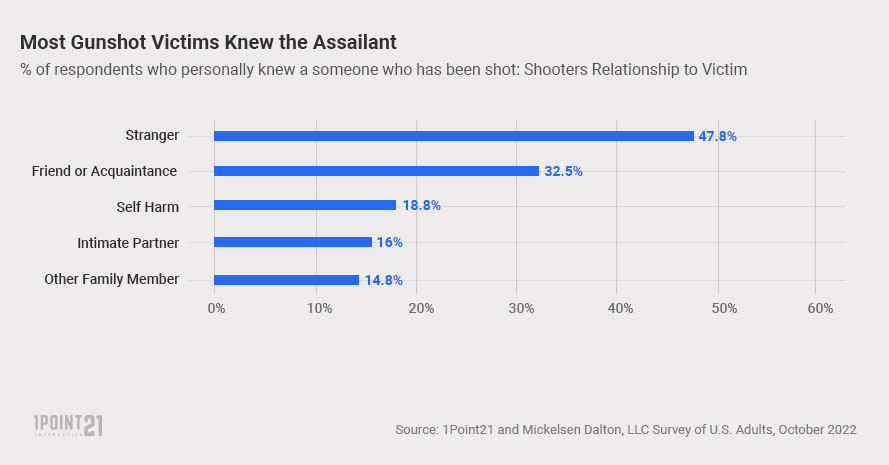 Location of the Shooting 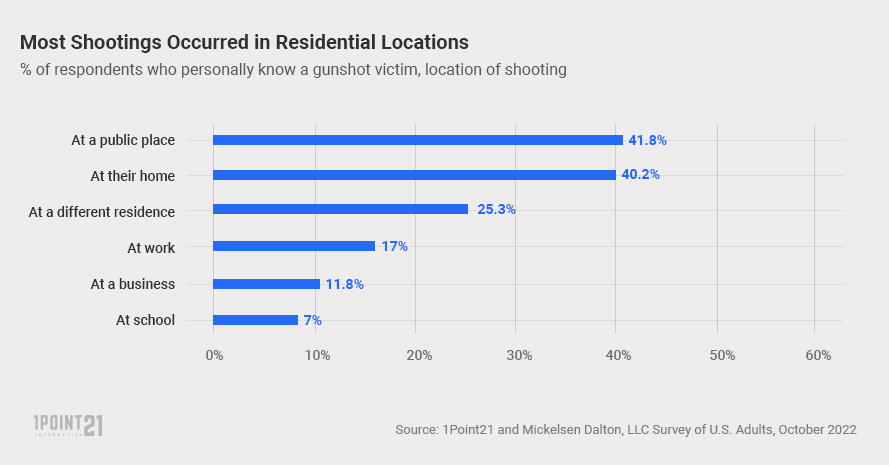 More Info About The Shooting Location

This question was of particular interest to us.  Much of our work with gunshot victims is centered around those who are shot as a result of negligent security or other dangerous conditions – particularly in apartment complexes and commercial locations.

We asked for more information about the location, below are the percentage of answers based on where the shooting occurred.

A handful of respondents reported an ‘other’ location.  These answers included: hunting, in the mountains, and on a farm.

While our survey provided much demographical information, we were keenly interested in the difference in answers provided by gun-owning survey respondents and non-gun-owning respondents.  There are as many as 400 million privately owned firearms in the U.S., does gun ownership affect relationships with gunshot victims?  We asked survey respondents if they owned a firearm to find out if their experiences were different from non-gun owners.

Shot by an Intimate Partner 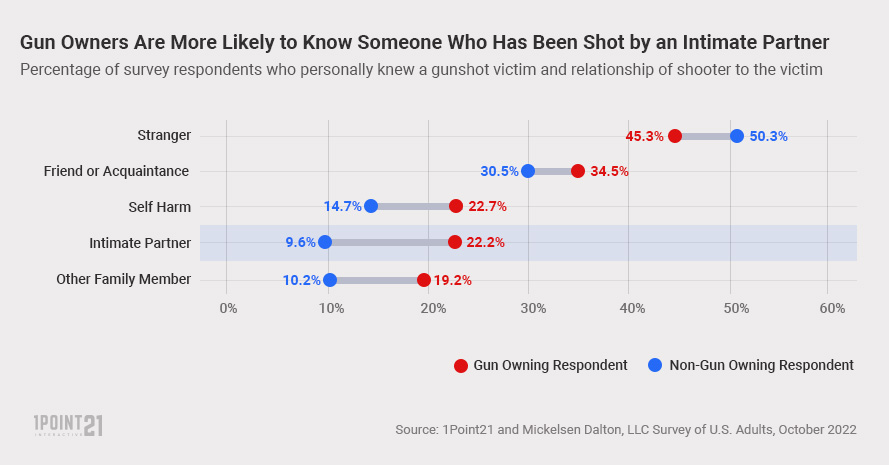 At the same time, non-gun owners were more likely to know someone who was shot by a stranger.

Gun Owners More Likely to Be the One Who Was Shot

Gun owners were also much more likely to report that they themselves have been shot.  In fact, they were nearly 7 times more likely to be shot than none gun owners. 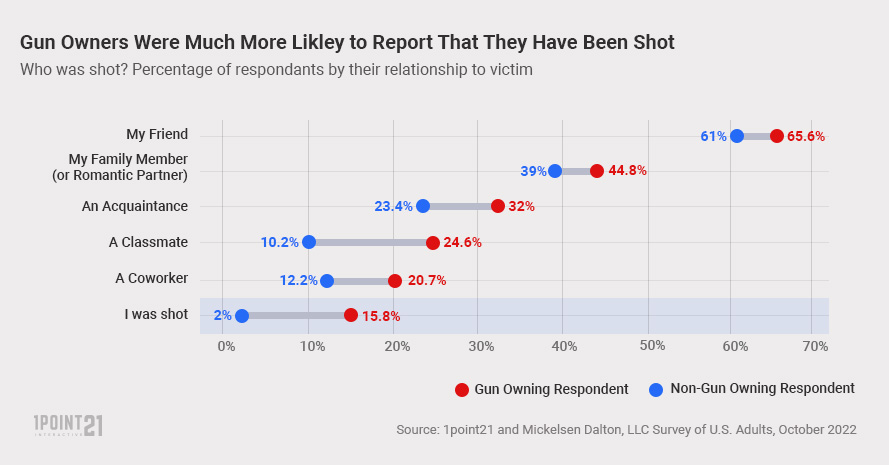 At Home or In Public?

Some studies have shown that having a gun in the household significantly increases the risk of gun-related death in the home.  It appears that it also increases the likelihood that you know someone who has been shot in their own home or another residence.  However, gun owners were less likely to know someone who was shot in a public place than non-gun owners. 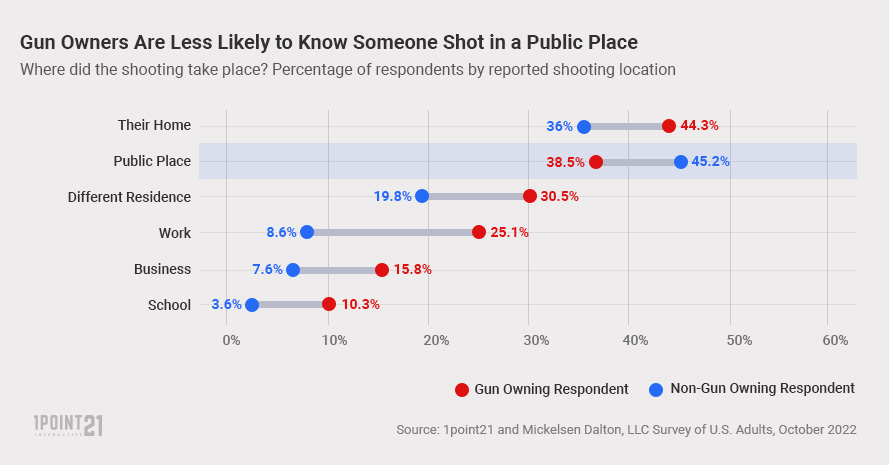 Methodology and Fair Use

This study is based on a survey conducted in October 2022.  Over 700 U.S. Adults took part, to help us better understand gun violence, where it occurs, and who it affects. *Disclaimer.  Of course, we understand that this data is the result of one survey.  However, as mentioned previously, it is our goal to help provide more context to the issue of gun violence to better understand how widespread its effects are.

If you would like to report on or republish the results of our study or any of the charts contained within, please link to this page to provide attribution to Mickelsen Dalton LLC.