Where Do Violent Crimes Commonly Occur in the U.S.? 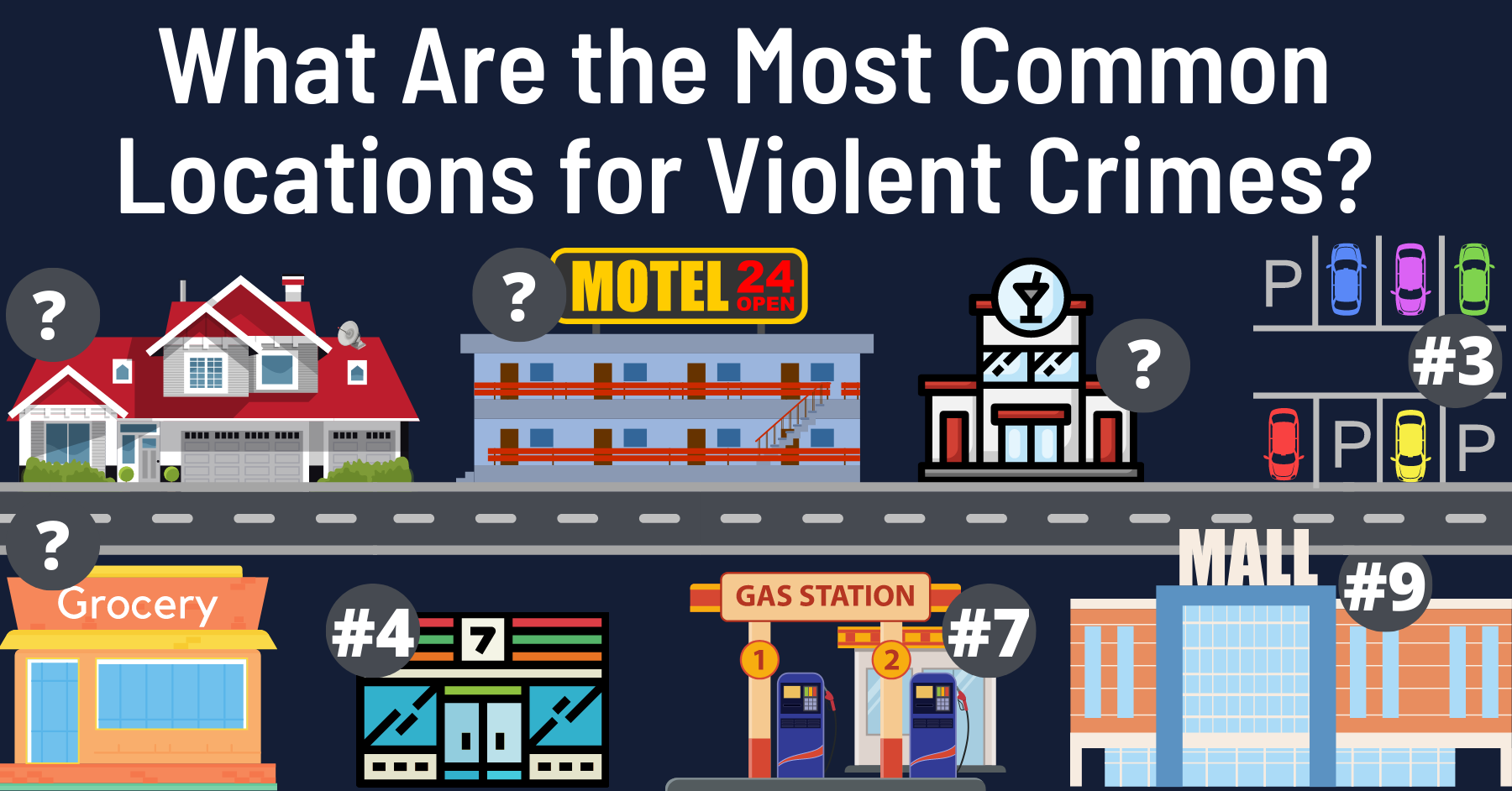 Snake Island, an island off the coast of Brazil, is one of the deadliest places on earth. It has the highest concentration of venomous snakes, and some spots on the island have a snake every square meter. There is a rumor that a fisherman unwittingly set foot on the island and died shortly thereafter from snake bites. Generally, we do not worry about snakes in the U.S., but violent crimes, including shootings, have become of increasing concern. Like the fisherman, we may not be aware we are setting foot in a dangerous location.

Recently, Gun Violence Archive reported that at least 90 shooting incidents occurred in the U.S. on August 3, 2022, alone – including 4 mass shootings, 33 deaths, and 86 wounded in just one day! From August 5 through August 7, 2022, Gun Violence Archive reported 360 shooting incidents. The map below details the areas where in the U.S. these shootings occurred:

Shootings account for about 60% of violent crimes in the U.S., and according to 2020 FBI data, these violent crimes are occurring at the same locations over and over. In this article, we will explore where violent crimes most commonly occur and what can be done to combat violence at these locations.

Where Do Violent Crimes Occur in the U.S.? 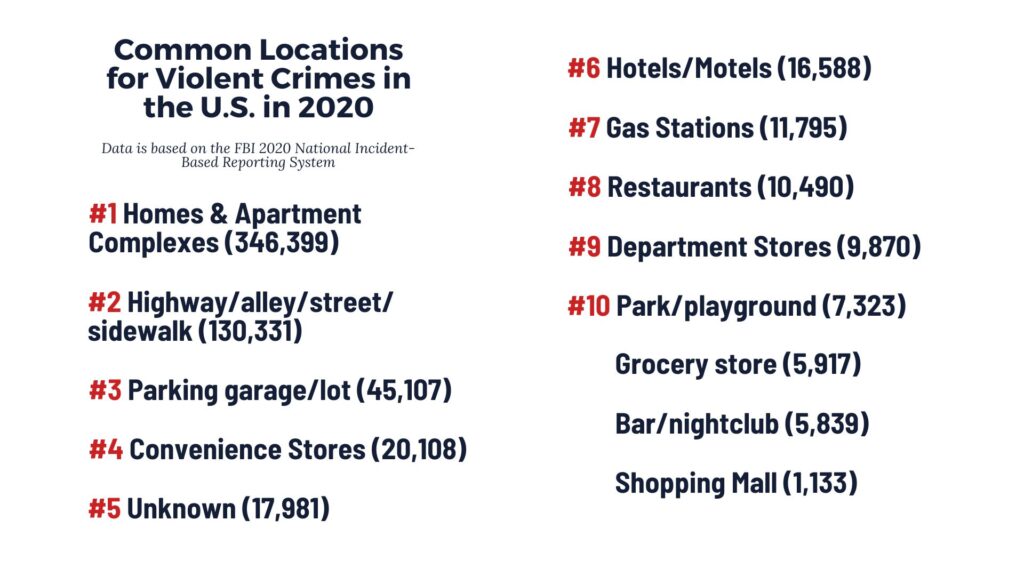 According to 2020, FBI Data, homes and apartment complexes are the number 1 most common location for violent crimes. Apartment complexes can be particularly dangerous. A combination of numerous people living in close proximity, a high turnover rate, and little control of who comes in and out can lead to a dangerous mix.

Moreover, tenants at these apartment complexes have less control over crime than those in residential homes. Apartment complexes are commercially owned properties, and thus, tenants are generally at the mercy of the property owner or manager to provide maintenance and security measures.

On July 29, 2022, local news in southwest Miami-Dade, Florida, reported that four teens between 13 and 15 years old were shot at the Cutler Manor Apartments. Google reviews suggest this was not the first time a violent crime has occurred at the apartment complex: 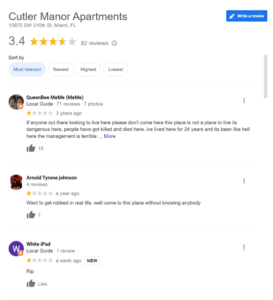 The apartment complex was also in the news in 2017 for a large drug bust that included 34 arrests. Eleven (11) guns and various illegal drugs were recovered.

In June 2022, the Atlanta Journal-Constitution, as part of a “Dangerous Dwellings Series,” identified “more than 250 chronically dangerous complexes beset by violent crime and, often, by horrific living conditions.” “Of the more than 250 complexes, 162 accounted for one in every five homicides in metro Atlanta in recent years.” Many tenants cannot afford to move elsewhere and find themselves trapped. On the business side, the owners of these apartments are thriving. Maintenance and security are seen as additional costs which many owners are willing to skimp on at the expense of their tenants. Controlled access gates, lighting, security personnel, and cameras can help deter crime at apartment complexes.

Over 5% of violent crimes in 2020 can be attributed to convenience stores and gas stations. Most convenience stores and gas stations are open 24/7 and typically only have one employee working at night. As a result, these are common places for loitering, harassment, carjackings, robberies, and shootings. Due to high crime rates, some counties have proposed mandatory security requirements, such as security guards and surveillance cameras.

“Florida requires businesses open between 11 PM to 5 AM to use at least one of the following security measures: two or more employees, bullet-resistant safety enclosures, a security guard, or a pass-through window to conduct business. Since implementation, convenience store robbery rates in Florida have dropped significantly.”

“In a number of communities, certain motels generate significant numbers of service calls and consume inordinate levels of police resources. Problem motels are frequently hot spots for both nuisance activity and more serious incidents, such as robbery and sexual assault. In addition, problem motels inhibit nearby economic redevelopment and reduce the number of safe, clean lodging units available for tourists and travelers.”

Small staffs and low room rates contribute toward budget motels becoming hot spots for crime and disorder. At a typical hotel/motel, around 80 percent of the guests are visitors from out of town. “By contrast, at budget motels with crime and disorder problems, it is not unusual to find that 80 percent or more of the guests are local residents staying for personal reasons.”

In another article, Schmerler explains how budget motels burdened with crime can take steps to address the problem. This includes screening guests and visitors, establishing minimum security standards, maintaining and enforcing “no rent” and “trespass” lists, limiting visitors’ contact with strangers, and refusing to rent to suspected prostitutes, gang members, sex traffickers, or drug dealers. “Motels with established crime problems have also been expected to employ an adequate number of security guards.”

Aside from residential dwellings, the greatest risk of a violent crime is on a street, sidewalk, highway, or in a parking lot. Pedestrians are susceptible to robbery, assault, and vehicle theft. Many businesses, such as bars, nightclubs, and shopping centers, provide security inside but neglect to employ security in the parking lot or garage. The National Institute of Justice recommends security cameras, adequate lighting, signs and graphics, and security personnel.

Property owners, managers, and businesses know better than anyone whether their properties are safe. According to the Insurance Journal, a jury awarded $43 million against CVS Pharmacies for negligent security. James Carmichael was robbed and shot while sitting in his car at a CVS Pharmacy in Georgia. The large verdict was upheld because robberies and assaults had happened there prior to the shooting. CVS knew their store was a hot spot for crime and did not take adequate security measures, such as hiring security and installing better lighting. If crime is foreseeable at a commercial property, the owner, manager, or business owner may have a legal duty to provide adequate security for their guests or patrons.

An experienced attorney at Mickelsen Dalton LLC can help determine if you have a claim and advise you of your legal options. Our crime victim attorneys have successfully represented dozens of gunshot and assault victims. Within the past three years alone, Mickelsen Dalton LLC has recovered over $30 million in verdicts and settlements on behalf of our clients. We have been featured in Fox News, the New York Times, the Washington Post, and several other national news organizations.

We are tireless in our efforts to get to the truth and fight for you and your family. Anyone may contact our attorneys for a free consultation at (843) 804-0428 or by email at help@mickelsendalton.com.